Getting to distilleries to have a look around and do the tours is actually quite difficult. Life and work always seem to get in the way but I know I should be more grateful living in Scotland. As a bleat on about how hard life is people from all over the world manage to make the pilgrimage but I can’t get to a distillery I could probably see from my office window.

Regardless, powered along with the help of some birthday vouchers I at last booked my tour to Clydeside Distillery. The distillery is next to the Clyde (I give all the details me) in Glasgow and is the second time I have been in the building. The first was when the Victorian pumphouse was used as a Curry Karaoke venue. The food and drink that night was terrible and the singing wasn’t much better so I am hoping for a better offering from the new owners.

I went for the Manager’s Tour this time which is quite expensive at £120 per person which includes 2 hours being shown around the distillery by the manager Mr Alistair McDonald finishing up with a tutored tasting of 4 whiskies with accompanying canapes. Before you leave there is a gift bag containing a signed bottle of white spirit, 2 very large Glencairn glasses and a tasting notebook. I guess that makes up a retail value of £40 in itself which partly accounts for the cost.

This particular tour only runs on a Thursday afternoon at 2pm so we started our visit in the cafe to have lunch. The Clydeside distillery is a 5 star tourist attraction and you can tell the extra level of service. The staff are attentive and there is a good sized team so even when busy there is little stress or pressure on the team to maintain calm and order. The cafe food is good if the breadth of the menu is perhaps a little narrow. The prices aren’t cheap but I noticed a lot of business people in having their lunch before going back to the office so it seems to be working well for them.

Next to the cafe is where a large bottle shop is located. The sister company to the company owning the distillery is AD Rattray which are both owned by the Morrison family. The same Morrison family who owned Bowmore, Auchentoshan and actually who originally built this pumphouse building for the Glasgow Docks. A fuller picture of the families history in the whisky industry is available over on the AD Rattray website adrattray.com/our-story/our-history

Back to the tour though and its 2pm and we have just met Alistair the manager. An Islay native who has over 3 decades in the industry. His previous employment was as the manager of Auchentoshan distillery which was the first distillery I visited as it happens. See Auchentoshan – Distillery Visit for more information on that “Ultimate Tour”

Alistair is a great people person who clearly enjoys the marketing aspect of his job. I think for some managers in the industry this minor celeb status can be a drawback or a red line for them. Not so Alistair who I suspect enjoys the brand ambassador rule or at least hides his distaste for it well. That is not to say he is all showman and no substance starting out in the industry as an engineer he learned the production side with a sympathy for the equipment and procedures which go into making it. He also is at pains to point out how much he likes clean and orderly production areas. Of course all the equipment is new but Alistair is keeping a culture within the production team of keeping everything looking and maintained to this high standard.

Back from my tangent and the actual tour starts with an educational museum like piece first. This is fairly unusual in distillery tours but shows the commitment to making the distillery work as a tourist attraction. It is for sure doing a good job in educating and captivating those who perhaps aren’t quite so intense on whisky as us dear readers. 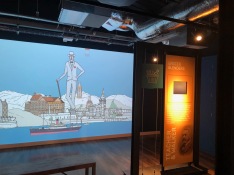 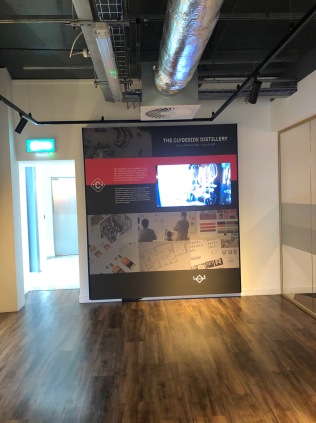 Once this tourist experience piece is done its on to the actual production facilities. These follow the usual pattern of following the barley’s journey through the distillery from milling, mashing, fermenting, distilling and filling. While discussing the mashing and washbacks Alistair asks if there is any filtered samples available and by luck there is. It is interesting how clear the wash is and this along with slow distillation are conscious decisions to get the correct spirit character which will make up their lowland whisky in the future.

For the managers tour we end up in the very small filling and bonded warehouse section of the distillery which is off limits to other tours. In there we tried both the new spirit and some cask samples. These are of course again for the premium tour and were a highlight. I will talk more about the spirit in another post but it was very good on its own and like Kingsbarns a fruity clean spirit. I have tried some new makes from distilleries I like which i can’t stomach at all but not so this one. 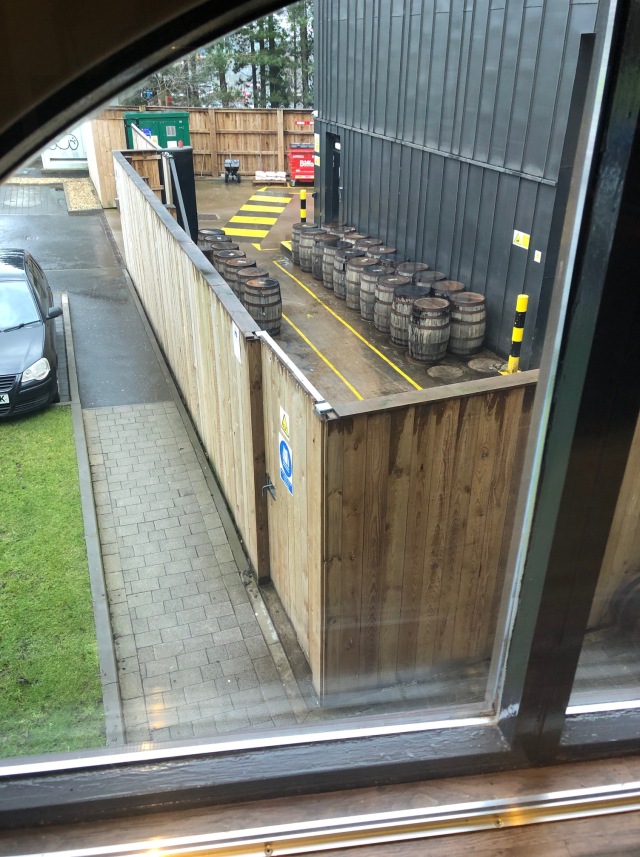 Very little filling is actually done on site with most happening somewhere else using another supplier. The casks filled on site are for the cask buyers who can come and name their casks in a special tour of their own. This is an expensive thing which won’t be around for much longer so I guess contact them now if you want involved.

With the production tour complete it was off to the tasting room for 4 drams and canapes. This is the time to ask questions and chew the fat on whisky and life. This part I suppose could go on and on but I needed to get off home so left early while others were talking. The four whiskies we got to try are all ones with a personal connection to Alistair which I think is a nice touch. They were: 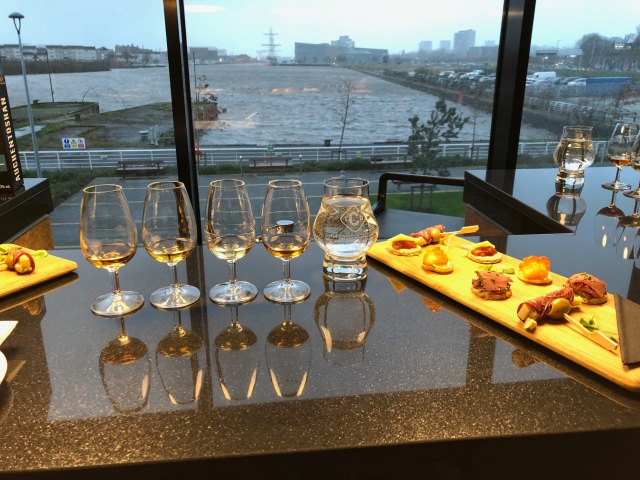 The views over the clyde were nice while sampling the whiskies. Even on a cold wet dark cloudy day there was an atmosphere and romanticism about the distillery. This is quite a hard thing to do with these newer modern distilleries. I think like Kingsbarns   using an older building has helped with the feel of the place where somewhere like Arran perhaps struggles.

The visit was a great fun and I hope to come back again and see how things change as their own whiskies start to come on stream. They are a very well managed and put together outfit which all the staff should be proud of. From a business perspective there multiple revenue streams show a maturity in the executive management which I think is impressive and marks them out as one to watch for the future.