Back in October 2016 and before this blog was created I visited Auchentoshan Distillery just outside Glasgow. I was having a bit of a rough time and needed to do something that was just for me. I had never visited a distillery before but I have read extensively on the subject (as you might expect). It was time to experience the sights and smells of a real working distillery to better understand the theory however. Since I had not thought of doing a blog back then I don’t any pictures so this post uses content from other sources unfortunately.

In for a penny, in for a pound as some people say so I went for the “Ultimate Experience” tour. This 2 hour 15mins tour is the most in depth one. It includes a tour around the distillery, sampling directly from a cask and a tutored tasting of some of the whiskies on offer. This tasting also includes vintage cask samples which are not available for sale. The experience is not cheap at £55 but it’s something you only do once. 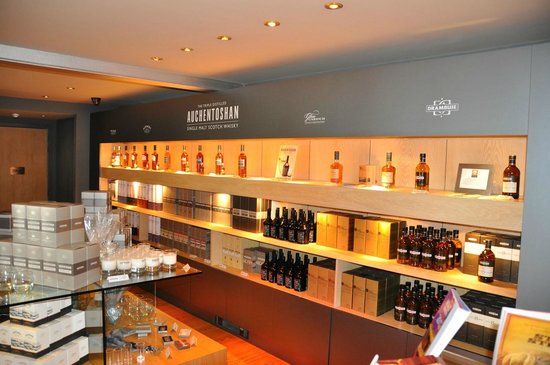 The day starts in the visitor centre with a video of the history of the distillery while you wait for everyone to arrive. Once everyone is ready to start you go into the main production areas and see the large mash tun. At this point on my tour I got my first sample of whisky. The first one was the American Oak expression. This is the Auchentoshan you can expect to see on offer in the supermarket. As such, I have looked down my nose at it (sorry)and not considered it for purchase, until now. On tasting I am pleasantly surprised at how decent it is. Lots of flavour and easy to drink whisky. The casks are all between 7 and 9 years old and for the offer price of £20 is excellent value for money.

While sipping we are given a demonstration of the barley used to make whisky and how it is ground down to make into a mash. There is also a sample of peated barley to smell which isn’t used at Auchentoshan but good to experience the difference in smells between the air dried and the peat dried barley.

Moving upstairs to the traditional Oregon pine washbacks we get to see a number of different batches at different stages of their fermentation process. We are also invited to taste the brewing mixture at this point. I wasn’t sure about doing this but it was not as bad as I feared. The yeasty brew is very bready and a light beer sort of flavour. I only take a sip and bin the rest though its not really my cup of tea.

After the challenge of the wash it is time for more actual whisky. The 12 year old core expression was the only one I have tried before turning up at the distillery for the visit. I remember it tasting very licorice-y but on tasting again on the day I didn’t pick that note up at all. It is interesting how the same whisky can taste so different on different attempts.

To accompany the 12 year old we have an explaination of how Auchentoshan does distillation. Famously, Auchentoshan is the only scottish distillery to triple distill all the whisky. The triple technique is common in Ireland but not done in whisky production generally. The downside of the extra distillation is the alcohol produced has less impurities in it which are essentially the flavour compounds. The more neutral spirit makes a good base for wood maturation however so Auchentoshan is a good distillery for those who like wood drive expressions especially. We also get to try new make spirit at 80% alcohol as it would be off the stills. This was not as intense as I expected but very fruity. Definitely something to try once.

With that the production tour is complete and we head outside to the warehouse. Inside the warehouse we are given an explanation of what happens to the produced alcohol.  What wood is used and why the previous contents of the wood is important. It is pointed out that Auchentoshan use real whole sherry casks and quality bourbon casks for there maturation. Previously, my impression of Auchentoshan from passing observations was that the produce was high volume and low quality. My impression was there was no care taken in what was produced.

On actually visiting the place though I was immediately struck by the production process being a relatively small, craft operation. The wood policy is strong and uncompromising and generally I really gained an appreciation for the brand. Speaking of quality our last dram before the tasting is from a 12 year old ex oloroso sherry cask. Drinking whisky which you watched being removed from the cask while standing near so many other casks is very atmospheric. The whisky is chewy, fruity and intense. The sherry matured cask strength Auchentoshan’s really are on another level.

The last part of the experience is to go into the blenders room back in the visitor centre building and taste a few more expressions. This was an amazing experience tasting some travel retail expressions and cask samples. To share them with a tour guide who leads you through them, asking questions as you go is invaluable to the overall experience.

The finale is to try the 38 year old 1975 vintage. This bourbon matured cask strength whisky was beautiful. Like nothing else I have tasted up to now but, my goodness, it’s experience at £600. Very much outside my budget but I did pick up a small 20cl bottle of the distillery cask on sale in the shop and the 21 year old bottle as well.

The Ultimate experience is really really good. I enjoyed it immensely and although I admit mine was extra special being a one on one experience because it was off-peak. Even with a full complement of participant’s it would be absolutely be the ultimate distillery visit.