Bunnahabhain is a great little hidden gem on Islay. Up a road which few would enjoy driving with any great regularity it is a rustic purpose built Victorian factory for the production of whisky.

Lately it has been announced that the owners will be investing heavily in the facility and upgrading the cottages for tourists. The distillery generally will get a lick of paint and the visitor centre will be bigger and better. The whole thing will cost £11 million and take three years which is a serious investment by Distell but I hope it doesn’t lose its uniqueness and go too modern like so many are now. 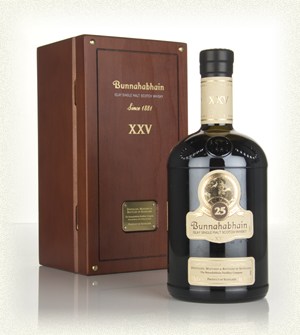 Speaking of not being too modern this 25 year old official bottling is not the current one on release. This older bottling dates from before 2013 and is lightly peated with the current release being unpeated. Both are bottled at slightly over 46% ABV and come in a wooden box. The box on the one I am sampling is above and the box for the new version is like below: 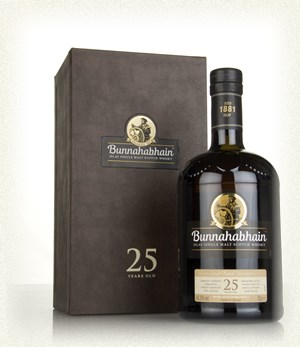 Each were around £330 a bottle which isn’t remotely cheap and not reasonably affordable for most people however the older bottling was only 400 bottles so pretty exclusive.

Like you would expect both considering the price and age of this bottle and the excellent bottling policy from Distell’s scottish malt whisky brands this is natural colour and unchill-filtered.

Nose – The peat is light but at the front. The age has mellowed the smoke and made it less ashen than younger bottles. Beside the peat though there is spices of cardamon and nutmeg with fruits coming from figs and raisins.

Palate – The texture is thick and syrup-y in both mouthfeel and taste. There is toffee and coffee beans which has been mixed with charred wood.

Finish – Very very long finish as you would hope for with all those years in contact with wood. The wood gives the whisky that old leather and varnish note with stale cigar rooms from the peat smoke.

What is interesting is that the light peat really makes this whisky. I am not sure if without that extra dimension there would be much interest from the probably sherry aging. In that respect it would be interesting to check out the new version sometime soon and compare notes.

In terms of this one though its a great interesting whisky and if it can be found at auction for an affordable price you are willing to open it at then I would do it. The good news on that front though is auction prices look to be sitting about £100 + commission under RRP.