Following on the World War II history around the Islay airport I spent an afternoon doing some research on old old Islay. I came across a really fascinating resource from the University of St Andrews and the photographic collection it has digitised online forms the basis of the content for this article. If you wish to search the collection which amounts to over 800,000 photographs taken around Scotland you should visit http://www.st-andrews.ac.uk/imu/imu.php?request=home

This blog post is split into three sections based on time. From the Edwardian era to the swinging 60’s and inside each section we will travel around the island picking up local landmarks are we go. For reference you can use the map below:

The earliest images I found are from 1904 and are postcards mostly created by Dundee photography house J Valentine and Sons.Valentine and Sons in the 1900’s was run by James Valentines son William and were the largest producer of picture postcards in Scotland. The company would stay in the family until 1963 before being sold and since 1994 there has been no sign of what was a world leading photography operation in Dundee.

Around the coastline of Islay and Jura there are hundreds of shipwrecks as you might expect. As we start our journey in 1902 by boat it is fitting to consider the boats which didn’t make it to port.

This postcard is of the paddle steamer ‘Islay (III)’. The ship ran aground off Sheep Island half a mile from Port Ellen. The ship, built in 1872,  was doing its regular twice weekly sailing between Glasgow and Port Ellen on 15th July 1902 when its new captain in dense fog managed to run it aground for the second time in 5 months. As you can see from the postcard the ship was listing heavily to the side but all passengers and cargo were removed safely. The ship is still there today but has had a lot of the metal salvaged since 1902.

This ship and 39 other shipwrecks off Islay have been investigated and compiled into a book with other shipwrecks in Argyll by Peter Moir and Ian Crawford. To get their book you can visit their website at http://www.scottishshipwrecks.com/argyll-shipwrecks/

If the ship made it into the safety of Port Ellen harbour then the village of Port Ellen was a well developed area by 1904. The shore line of houses and shops is still there today very much as it was then.

The postcard really shows how developed the area was at the time. The only missing place of interest is the distillery which would be over the right hand shoulder of the photographer.

Moving north up one of the main roads on Islay past what will become Islay Airport at Glenegedale and you come to Bowmore. This is another busy village in the early 1900’s with many fishing boats and of course Islay’s first distillery.

Another postcard without the distillery in view is a reminder that over one hundred years ago distilleries were industrial plants rather than the places of pilgrimage today. The focal point is of course the church on the hill. The chruch was built without corners so the devil could not hide from parishioners. Bowmore and the church was a planned development in 1770 with the distillery coming onstream in the early 1800’s.

Looking at the more modern image from a similar position we can see that apart from the odd piece of health and safety the area is both basically the same visually but also in how it is used by local people.

Travelling on the coastal road to the east, we can stop for a break at the Bridend hotel which would be around fifty years old when this postcard to made in 1904. Owned by the Morrison family who also owned the entire island at this point as it happens.

In the postcard you can see the sign above the door calls this Bridgend Inn which was the original name before being called a hotel much more recently.The Bridgend Hotel website includes a menu from 1914 which includes delights such as Hare Soup, boiled mutton and coffee jelly.

While here we should drop in on the ancestral home for Islay the appropriately name Islay House.

This large country house and centre of island power was already an established building in 1902 when this postcard was taken. The original core of the estate was built in 1677. It was heavily invested in around 1737 and by 1825 all that can be seen here had been built. However, a dramatic change would happen only 6 years after the above image was taken and Hugh Morrison inherited the island. A whole new wing would be added in mock Georgian style to match the existing wing on the left hand side. The below image is of the house as seen today with its new wing.

The “Big House” was a private family residence until as recently as 2013 where the current owners have spent a large amount of money turning it into an upmarket hotel and wedding venue. Locals or Ileachs would traditionally ask the laird to get married here and now if you have the money you can as well.

The estate also came complete with a golf course known as the Macrie course which had epic coastal views.

As we come to the end of our journey from over one hundred years ago our last stop is Port Askaig and the Port Askaig hotel.

Before jumping on a boat back home to the mainland. 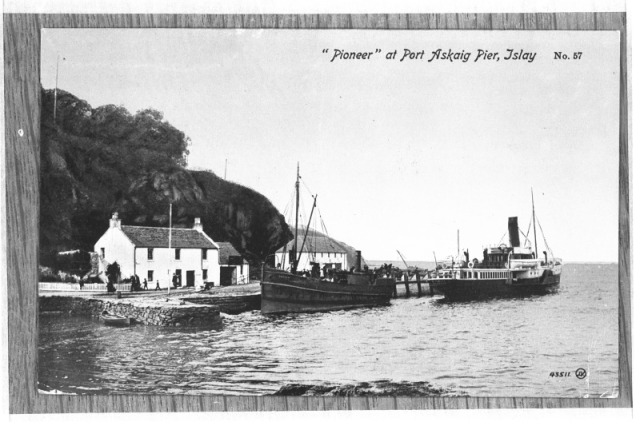 The modern day Port Akaig still has its roots in those early days as you can see from the image below the hotel and pier are all in there and in regular use today.

For our next journey around Islay we have jumped through two devastating world wars, a stock market crash and came out the other side. We are still mostly using postcards here but this time from 1946.

This colour postcard shows that there has not been much change in forty years with only the pier wall appearing for the first time. The photographer also manages to slip in Bowmore distilery to the right of the image now as well.

Taking the same coastal road as before to Bridgend but this time turning east towards the Rhinns we come to Port Charlotte.

Again we can see that this village has not changed much since the turn of the century. The largest change has been the closure of Port Charlotte distillery in 1929 along with Port Ellen of course. The three buildings showing their gable ends to us are part of that distillery and are still there today.

This is the end of the road for our journey in post war Islay. The distilleries have still not got the barley to restart production, families are trying to recover from the lose of life from two brutal mechanised wars in living memory and rationing will not end until 1954. Hopefully, in our last journey we will see some signs of economic recover in our little island paradise.

Landing on Islay using the old fashioned method of ferry at Port Ellen our first impressions are very little has changed or been developed. The buildings look quite run down and you could be forgiven for thinking this postcard was taken before 1957. 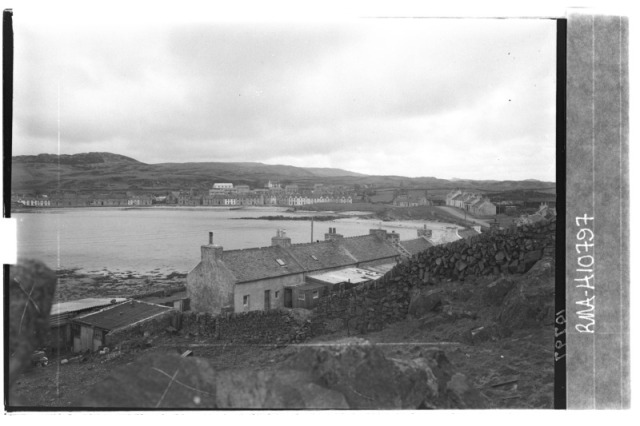 There has been development in the village though. Like these playing fields which are still in use today and managed under a charity.

Now taking our usual route which will now probably be by car to Bowmore we see we are not the only ones on the roads now. The below image is from 1958 and there is not a horse in sight.

Our last port of call before leaving for the Port Askaig ferry will be at the Caol Ila distillery. In 1958 the distillery looks a lot different than it’s modern day re imagination of  how a distillery should look.

The original Caol Ila distillery was a traditional and pleasing looking building. The new building which opened in 1974 and made Caol Ila the high volume industrial powerhouse it is today is not quite so nice of the eyes. The quality of the whisky out of this eye sore however is not to be under estimated. In fact, in second thought please do over look Caol Ila and leave it in the shelves for me! 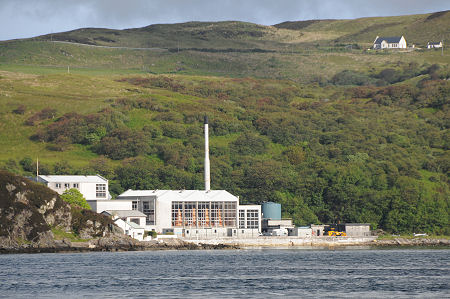 The only thing left to do is catch the ferry then and wave goodbye again to the friends we have made on our journey.