Bourbon is not something I know an awful lot about. Being Scottish means that scotch whisky is easier to get access to and easier to integrate into. As of 2018 as well due to the current President of the US starting a trade war we now have 25% import taxes on bourbon so local whisky is much more cost effective just now.

What that does mean though is older bottlings stuck on shelves are becoming little cheap treasures. So step forward an older, higher strength, version of the standard Buffalo Trace bourbon miniature from none other than Amazon. Amazon, as an aside, is a great place for catching bargains for readily available spirits on Deals of the Day and Lightening Deals but it does require you to be constantly checking up on it but its worth it I promise you. 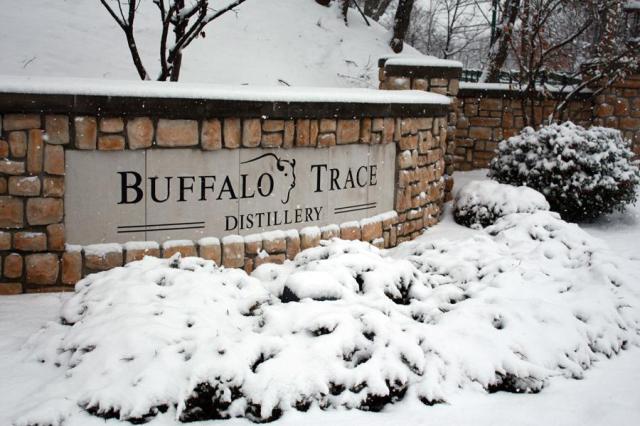 The Buffalo Trace distillery in Kentucky has been distilling on the same site since 1811 and now includes a large number of different brands. One of which is Blanton’s which I have reviewed before.

Buffalo Trace is a large operation and in 2008 filled its 6 millionth barrel since prohibition which is quite a lot of whiskey to have been produced. This has seen fairly linear production since 1933 with 1 million barrels produced in 1943 and 2 million in 1953. That to me seems slightly odd to me as I would have thought production would be increased from the 40’s. However, what it does shows is a commitment to the future as production has been continuing when popularity was down over the decades.

This release is the standard release which bears the name of the distillery. This older version is 46% ABV but if you buy it now in the supermarket it will be 40% which is something to bear in mind. This is purely to maintain the price point in the shops in my opinion since taxation is linked to strength. It is a pity because the taste will surely suffer as a result.

This whiskey is around 9 years old and each batch contains no more than 45 barrels. Each bottle is still done by hand in the US which must be pretty unusual in a developed country which labour is relatively expensive.

Palate – The nose is bright and intense but the palate dies away. There is a lot of wood influence and the texture is pretty decent. There is a pine notes and saw dust note as well.

Finish – The finish has a prickly heat of chilli flakes to it and more wood notes.

This is my second contact with Buffalo Trace having first tried the new version which is watered down to 40%. Both versions and good simple stuff with crowd pleasing standard bourbon flavours. The problem is I like the older version much more purely on the strength which allows a stronger spicy flavour to come through which is a shame going forward.

However, while not as good as the Blanton’s Straight From The Barrel – Barrel 52 it is certainly better priced and represents most of the experience for far less expense.