I quite like Laphroaig just now and certainly much more than I used to. The triple wood appears to be a marmite dram which equal numbers of disappointed and satisfied customers.

The Triple Wood is a no age statement expression which was originally just for the travel retail sector. In the past I have always been frustrated by travel retail only bottles which seemed interesting and exciting and, more importantly, out of reach. In more recent times it seems that these are all heavily marketed bottles which are all mouth and no trousers. 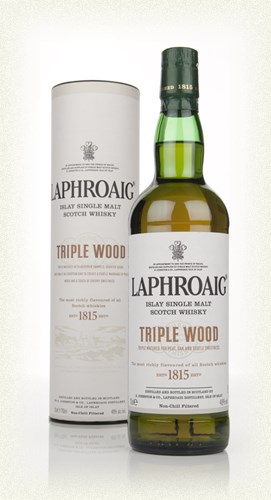 The Triple wood name comes from the use of 3 types of cask. Initially, a traditional ex-bourbon cask before a spell in a quarter cask which is a type of wood almost synonymous with Laphroaig since the success of the QC release. Finally, there is a finish in Oloroso sherry butts. The bottles are released at 48% ABV and cost around £55

Palate – Quite a thin texture even with that extra alcoholic strength. More iodine and earthen notes. A touch of fruitcake but it is very very subtle and background.

Finish – Quite short but drying finish and and your standard medicinal notes again.

It is quite a disappointing whisky really which didn’t have some of interest over the much cheaper expressions in the range. I would go for those or if you want a flavourful and sherry finished version perhaps consider the super sweet Laphroaig PX Cask