At last I have made it to Christmas Eve. In every box on every year I have done this it has been a well aged blend of grain on Christmas Eve. This 28 year old Cambus is perhaps on the younger side of them but it follows the pattern we have come to expect.

The Cambus grain is a new one for me as well although I must admit I have never got into grain whisky. I know a number of people seem to like it but whatever they are tasting I am not seeing it myself. Regardless it’s important to approach these things with an open mind I suppose.

The Cambus distillery dates back to the 19th century when it was first a malt distillery and then a grain distillery. A one time it was the focus of a court case with other malt whisky producers wanting Cambus to stop using the name whisky for their grain product produced with a column still. In the end the court case was won by the grain producers and grain whisky lives on in its own sector.

While grain might live on the distillery is no more. Closed in 1993 it was demolished soon after. The site however is still used by Diageo for warehousing and as a cooperage. For a very interesting article written after a visit to the site in 2016 see this Whisky4Everyone article whiskyforeveryone.blogspot.com/2016/11/visit-cambus-cooperage.html

Still available and at a decent £114 this is a 47% ABV single grain whisky from a closed distillery which has been aged for 28 years. Matured in a refill ex-bourbon barrel probably on the same site it was distilled at. This all in all seems a bit of a bargain but only if the liquid tastes good enough to enjoy. 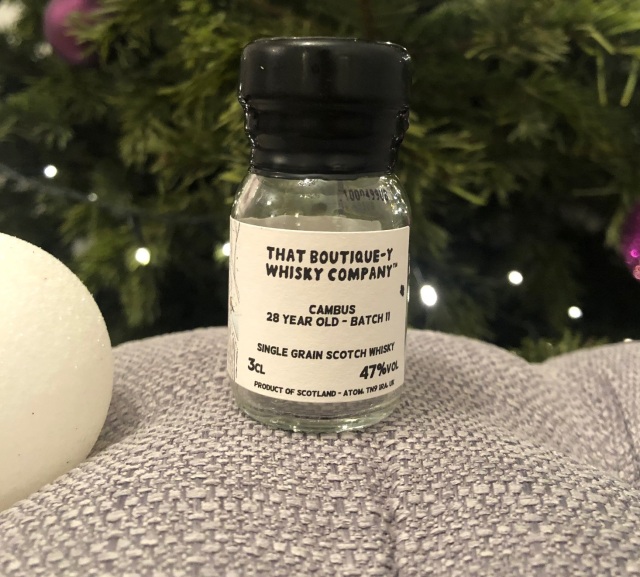 Palate – Dairy chocolate and a nutty milky coffee. The texture is thick and viscous

Finish – While the palate might be thick the finish is relatively short. There boiled fruit sweet notes galore however.

I enjoyed this actually and its a decent price at £114 so we have ended on quite a high. If you like milky nutty coffee’s with a fistful of sugar this is for you.