Day 12 already and we are half way through the run up to Christmas. It always surprises me how quickly Christmas goes in now. It’s probably a lot to do with working so intensely through December but each year I want to slow down and savour the moment but as yet its never came to fruition. Perhaps next year.

Longmorn is near Benriach and both were built by the same person. John Duff was an entrepreneur in the 19th century and tried setting up business in South Africa and USA before starting on the Longmorn project. In the 20th century Longmorn was again part of another entrepreneurial story in the form of Masatake Taketsuru-san. Taketsuru-san worked at the distillery to learn the trade before returning to Japan. He would setup Nikka distillery which is still producing whisky today using stills closely resembling those at Longmorn. 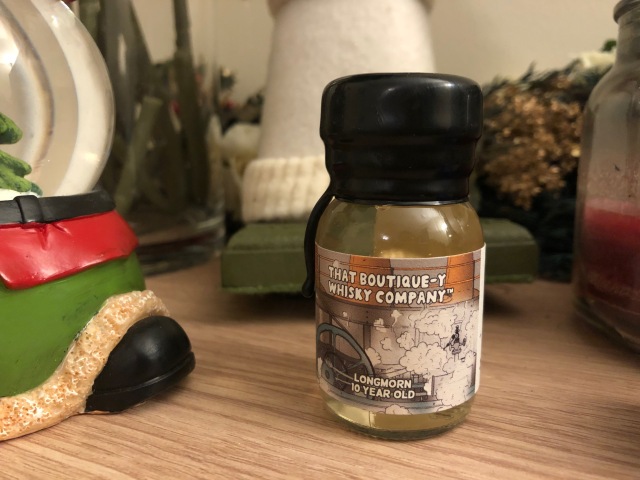 Like yesterday this release is 10 years old and still available to buy. Interestingly it is also a similar price at £77. This is another rare malt to see on the indi market and the price again reflects that. This is of course fine if the whisky is good enough for the ticket price. Lets move on and see.

Nose – quite grassy and slightly fruity with a herbal note or two and cooking apples.

Palate – Grassy again with a medium texture which is spiky and sharp. Lots of citric zest and shortbread

Finish – A heavy finish with tart apple pies and plums. Lots of spice and chilli. Peppercorns and more lemon zest. Very sour like those sweets for kids which are sour with no other discernible taste.

I found this while being slightly more expensive than yesterday also slightly less interesting. That is not the trajectory you would hope for in these tastings now is it. I am finding that Boutique-y whisky very much caters for the spirit led enthusiast which is fine but I have to admit I am pining after a red wine or a sherry bomb at this stage. If for nothing else than to shake things up a bit.