The final whisky of the tweet tasting and I am sure you will be glad to get onto some other content is a peated single malt from Glen Moray. Peated spirit has been on the production schedule at the distillery for some time now. In most supermarkets you can pick up the Elgin Classic Peated version for around £20-£25 depending on who running offers.

Islay of course is the one place known for peated whisky but its not the only place which makes great peated malt whisky. In fact, some of the most interesting peated whiskies I have tried this year have been from the mainland. A case in point is the peated Glenturret just at the New Year.

Gamay it turns out is a variety of grape and is used in the production of red wine. Wine prominently from around the Loire valley with the grape itself being mentioned as far back as the 15th century. The grape itself has a number of useful characteristics which make it easy to cultivate and produces a lot of wine compared to Pinot Noir. The below image is from Wikipedia and shows Gamay grapevines tightly planted next to Pinot Noir grapevines which are required to much more widely spaced. The knock on effects of this is of course obvious.

In terms of the flavours a Gamay grape might give you I am informed you can expect it to hint at notes of strawberries, raspberries, cherries, black pepper, freshly cut stone (wtf) and chalk. The body of the wine with a modest amount of aging will be light but evidently deeply fruity.

With our education complete on the wine which previously matured in the barrel we can look at the whisky we have in front of us. The whisky is actually the current distillery bottle your own whisky. If you visit the distillery they will have barrels in the shop from which you can decant a little into a bottle to take  home. I think these are great opportunities to get something exclusive and at a decent price (generally). If there is some available at the time of writing Glen Moray are the only distillery I know of which will post out a bottle to you if you can’t get to the distillery. So grab your credit card and find their number online #spoilers.

This is a 2014 vintage and was full term matured in this Gamay cask. A cask possibly owned by the distilleries parent company before coming to the distillery. It has been bottled obviously at cask strength and since you are emptying it straight from a cask is also natural coloured and hasn’t be filtered by any machines. 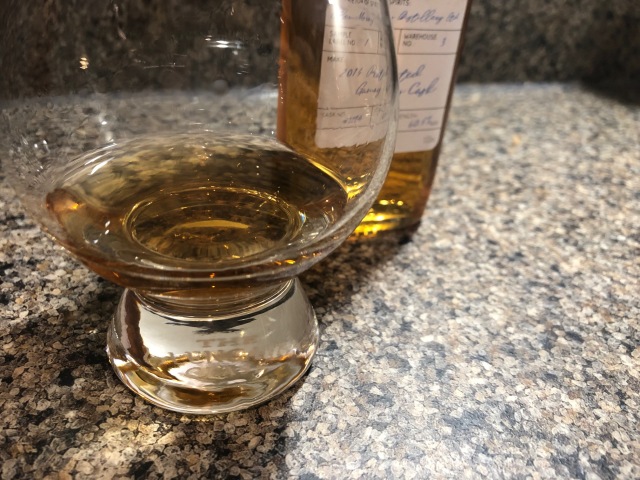 Nose – Bacon flavoured wheat snacks, strawberries but freshly picked from a field. Its a young whisky so needs water to cut through its energy. Black pepper and more tart summer fruits.

Palate – The peat is more evident on the palate which is earthy and vegetal in nature. That red wine is still in full force though giving notes of cherry and strawberry

In the other reviews I spoke about the subtle and considered cask maturation in Glen Moray. I complemented it as such and I still stand by those words. I think its important to try whiskies which are layered, complex and demanding to get the most from them. You can’t get away from the unadulterated pleasure of a blunt full force young peated whisky in a boisterous cask really imposing its previous contents on the whisky. Its just a guilty pleasure I have and when was the last time you had peat and red wine together anyway?

Rarely I would guess.