Now we are starting to get the main event. The Islay single malts are the main point of this tweet tasting marathon we are going through. Coming soon is to limited edition Cask Islay releases of which we got to sample ahead of their release in soon(ish).

The Cask Islay release was the first product in the range which started the Cask ??? series. The product was originally a blended malt but since 2014 has been a single malt release from one distillery on Islay. From the twitter night I found out the same distillery has been used but if that was ever to change the marketing would change to account for that which I think is an excellent touch of consumer transparency.

I feel this could become repetitive but its natural colour, non chill filtered and bottled at 46% ABV. Not a bad thing to have to bang the drum on if I am honest and things could certainly be worse. Like the Cask Speyside this sits in the 35 pound bracket in the uk which is about entry money for non supermarket loss leader malts.

In terms of the recipe we know that this has been matured with a mixture of ex-bourbon and ex-sherry barrels and in terms of age there is no news to report. It is, however, pretty young from tasting it although that is to be expected given the age and how peat dissipates over time. 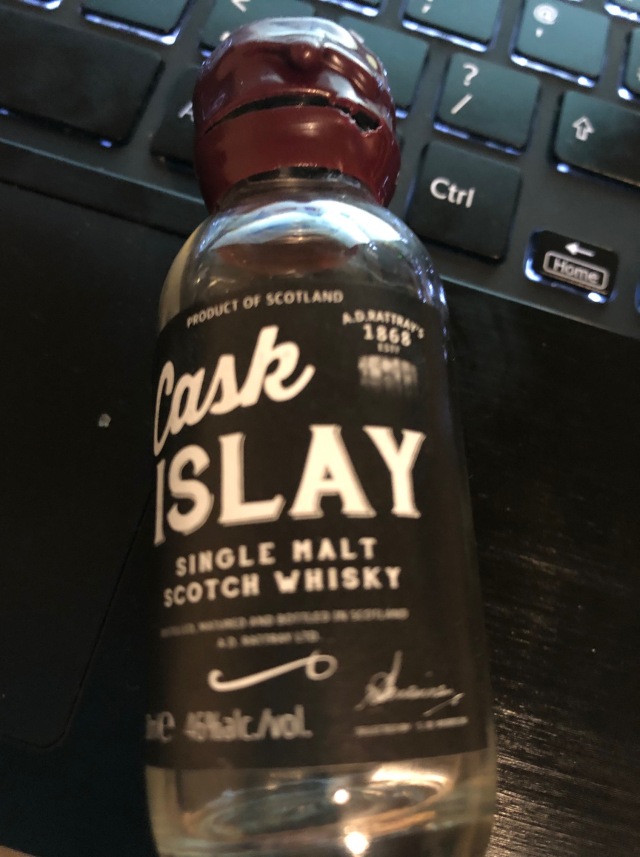 Nose – light islay peat full of earth and vegetation. Something very oily and viscous is here as well. Sea-weed and the smell of the beaches. If you dig in deep you might find bitter marmalade the old fashioned thick cut type.

Palate – the texture isn’t very thick compared to the heavy nose. There is a lot of spiky spirit and some honey. That marmalade from the nose is here again

Finish – The finish is long, dry and full of pepper and tobacco. The finish roll on the tongue and the back of the throat continually with a mixture of chilli and smoke.

A simple little whisky which highlights the unique nature of the smoke found on Islay. My head says this is Caol Ila but my heart says Lagavulin with that oily richy nose. I think that though is just my mind playing tricks on my and those notes are from short term maturation in Sherry hogsheads.

Tune in next time folks for what is to be the first of two very special drams. One which is to be released in October for a mere 65 pounds and the other not until after Santa has visited you all (assuming you have been nice)!.