Its about time for another Bruichladdich review as we know this is something of a regular occurrence here. There is loads of reviews and articles about the Bruichladdich distillery here on Malted which can all be read using this link. 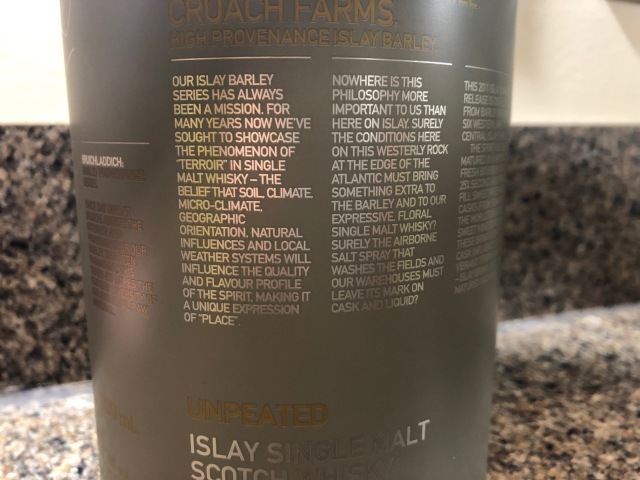 The Islay barley series taps into the distilleries obsession with Terrior. Previous versions have included a single farms supply of barley grown on Islay. As the series has gotten more popular and the distillery has gotten more popular this has been somewhat lost. This 2011 distillation run is a combination of barley (Publican and Oxbridge varieties) from 6 farms which are:

Previous versions, I believe, were also only using ex-bourbon barrels but this version is a combination of a number of different barrels. It is for this reason perhaps that so many different farms have been used. Regardless the composition is:

All of which is married together for 6 months before bottling at 50% ABV which is pretty high.

Nose – lots of cereal notes and coconut flesh. This is alongside the usual Bruichladdich spirit of green apples and pears.

Palate – The fruit notes continue with tinned peaches in syrup along with a lactic note which I get so often in Bruichladdich. A twist of wood sap, vanilla and honey  are there as well. What is difficult to me in this 2011 version is the spirit is not quite as thick as I remember Bruichladdich always being.

Finish – The finish is long and lingers with pepper and a boiled sweets note. A little oak but again this is a malty cereal whisky.

When you look at the composition you might be forgiven for thinking this isn’t going to be a barley focused whisky. That with all that first fill wood influence that it wouldn’t be realistically much different to the classic laddie expression. Nothing however could be further from the truth with the use of second and third fill barrels and a single vintage from 2011 (bottled 2018) the youthful spirit is still vibrant enough to showcase that barley and slow distillation process they have on Islay.