I already had a sample of this when I voted for Ralfy to review this whisky. I thought it would be interesting to compare notes which I have never had the pleasure of meeting him.

If you want to listen to his review you can do below:

Peated Bunnahabhain is one form of peated whisky which I find about the most enjoyable. There is something about the wood forward style of smoke which is distinctive and emotive of cottage open fires and rural living.

Bottled for the Good Spirit’s Co in Bath Street Glasgow this is a natural cask strength bottling of Bunnahabhain at 4 years old. Distilled in 2013 and bottled in 2018 it is necking on for nearly 5 years and is heavily peated which constitutes a very small percentage of the yearly production of Bunnahabhain. At the last visit to the distillery I think they also mentioned that the amount of peated whisky produced is going down each year as requirements for it in blending are now at an all time low.

This bottle was picked up from the shop in August this  year and is now all gone. At the time they also had an older invergordan grain whisky and generally have a few casks bottled each year. In the past there has been Laphroaig’s, Glenrothes’s and Glen Moray’s to name just a few of the distilleries bottled in recent years. 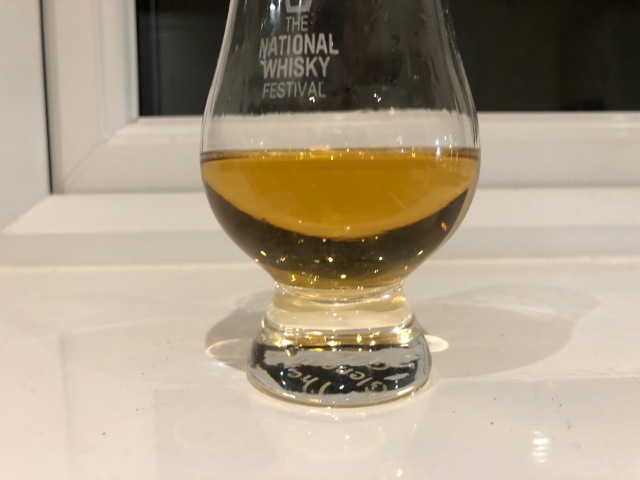 Nose – The most obvious aspect is Bunnahabhain’s dry ashy peat smoke. This becomes like bacon or BBQ’s meat with its salty edge. Away from the peat smoke though there is a touch of lemon and cloves

Palate – The palate is clean without any harshness or bitterness. The peat is powerful but not overbearing but rather smouldering and forceful. In terms of the flavours again it is all about that peated spirit which takes me back to winter’s by an open fire with a gale blowing outside.

Finish – There is a brine and sea-breeze note which is most obvious in the long peaty smokey finish. The cask makes an appearance given a spicy and chilli note but otherwise has been overawed by the peat monster which is this whisky

This is an amazing and cool whisky which shows that age is just a number. If you like peat then this is for you. All the way through this whisky is spirit-led and full of spirit and attitude. I have seen a couple of other very  young peated Bunnhabhains appear on the independent scene since this bottle so while this one might be gone others are might be available where you are now.