Compass Box are in independent “Whisky Maker” based in London with warehousing in Scotland from which they make all their releases. This includes a core range which  you can see in the featured image on this article and a steady stream of fairly expensive special editions. A lot of which are pretty good like my 30th birthday dram Compass Box Flaming Heart 15th Anniversary

Like Bruichladdich they, as a company, have been pushing hard on the transparency aspect which I agreed with very strongly. In the last couple of years they have been courting organic marketing and growth but I think this year perhaps the buzz is starting to settle down such is the fickle nature of the current whisky drinkers.

The Peat Monster is a no age statement blended malt scotch whisky which is natural colour and unchill filtered at a very good 46% ABV. The bottle is a heavy presentation style bottle which is too tall is fit on shelves (so annoying) and is an ongoing release which significant batch variation in the composition.

The reason I know this is because of transparency from the producers. On the Compass Box website they have a graphic which outlines the composition of the whisky which I have included below: 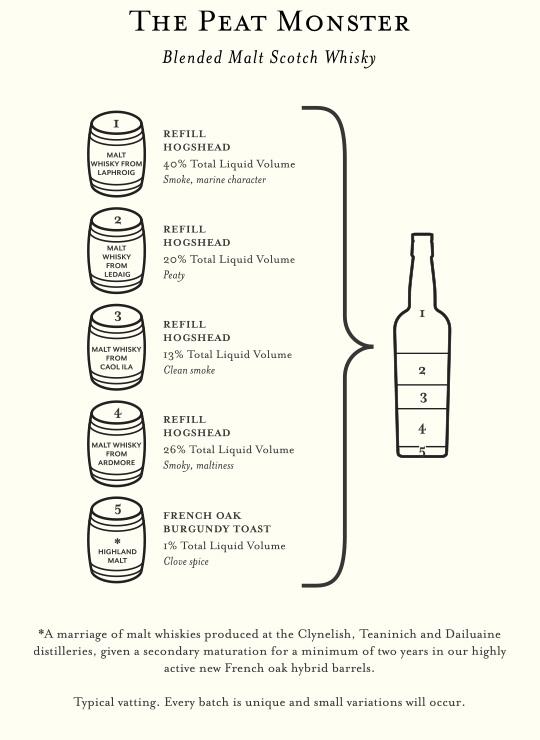 However, when I contacted Compass to get the ages of each parcel in the recipe they also came back to me with the percentages of their latest batch which had a much reduced amount of Ledaig and more Caol Ila in it. The emailing of Compass Box though is something anyone can do through their website and I would make sure you go and do it. The information you get is great and really adds to the experience in my view. The big thing to take away from the infographic is the use of refill casks and probably (definitely) young casks at that. This is to give a very spirit led raw peat punch effect using profiles from both Islay and the mainland.

Nose – plums with a savoury thick and meaty peat smoke. Strong notes of ledaig to me with a touch of brine and lemon drops.

Palate – Initially its sweet but this develops to an ashy peat undertone. In time it develops back towards sweet honey and touch of vanilla pods.

Finish – Dry and bitter which really draws all the moisture from your cheeks like a raw cooking apple.

This one just doesn’t sit well with me. I really like peated whiskies but this is not massively intense but equally not interesting either. For me it almost doesn’t have a clear idea of what it wants to be and is disjointed as a result. Disappointed sadly.