Which distilleries do I like more than others? Well, I like ones located on a Scottish island especially Islay. I like independently owned ones which are using traditional and craft methods which employ a large number of local skilled people and I like ones which are widely available.

So why then I am not feeling any love for Kilchoman? The reason is ultimately the spell was broken when I visited the distillery last year. It was my first distillery visit and the level of customer service was non-existent. The staff were rude, disinterested and inexperienced which left us feeling awkward like we had wondered into someone’s front room and not in a visitor centre open to the public. I have contacted the company since to complain and to point them in the direction of other people with similar experiences but they don’t seem to be bothered.

All of that is fine of course. Kilchoman don’t need me and I don’t need them. However, I hope they get their act together soon. They may do well to remember they were the first Islay distillery but not the last one in recent times. They aren’t the only show in town anymore and risk irrelevance which would be a shame. 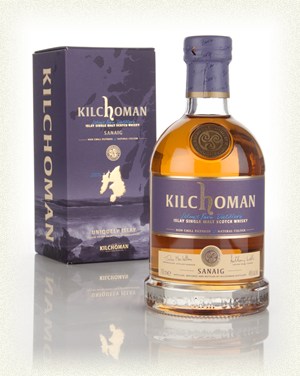 With all that negativity out the way we can discuss the actual whisky. The Sanaig is the second core range expression from Kilchoman. It is sherry matured biased to complement the bourbon biased Macir Bay. The whisky has no age declared but it will be fairly young but please understand this is not something to count against it. You get a healthy 46% ABV combined with a natural colour and non chill filtering to give some good production scores. They are also widely available in all markets and will cost you around £50 in the UK.

Palate – Lovely thick texture with ashy smoke and tobacco. There is a drying note from sherry and dark coffee. A sweetened edge comes from toffee to complement the dark notes

Finish – Drying dark chocolate starts the finish before the ashy peat sweeps into the action bringing with it more of that marine influence.

This is another excellent example of Kilchoman spirit led whisky. There is no way around it Kilchoman are still making excellent whisky. That aspect of the business is solid and well run but I still think the company would benefit from an injection of slick corporate experience to take them to the next level. A good example of branding would be Harris Distillery, of customer service at a visitor centre they can look up the road to Bruichladdich and of reinventing a brand they can go just north of me to Alexandria and Loch Lomond distillery. As Ralfy might say – “Just saying, only sharing”