From widely available in every supermarket and corner shop to a bottle originally only available for one week in one shop on one island. Whisky is a broad church and whisky sales channels equally so.

The Feis Ile is the Islay whisky festival on the Isle of Islay. Long before whisky festivals were so mainstream the seven distilleries on the island got together to drive tourism and brand recognition by having a week in May each year to have special events for those interested in something different. Each year the festival has grown in popularity and has a whole ecosystem of accommodation, catering and resellers all grounding their business models around this one week each year.

With it being so busy and so commercial I have never actually been myself. I tend to prefer going just after the crowds have all left and the distilleries are quieter. For me that’s when you get a real tour and decent time to talk to the visitor centre staff. There is a huge difference between being on a tour as one of many and being on a tour and being the only one! 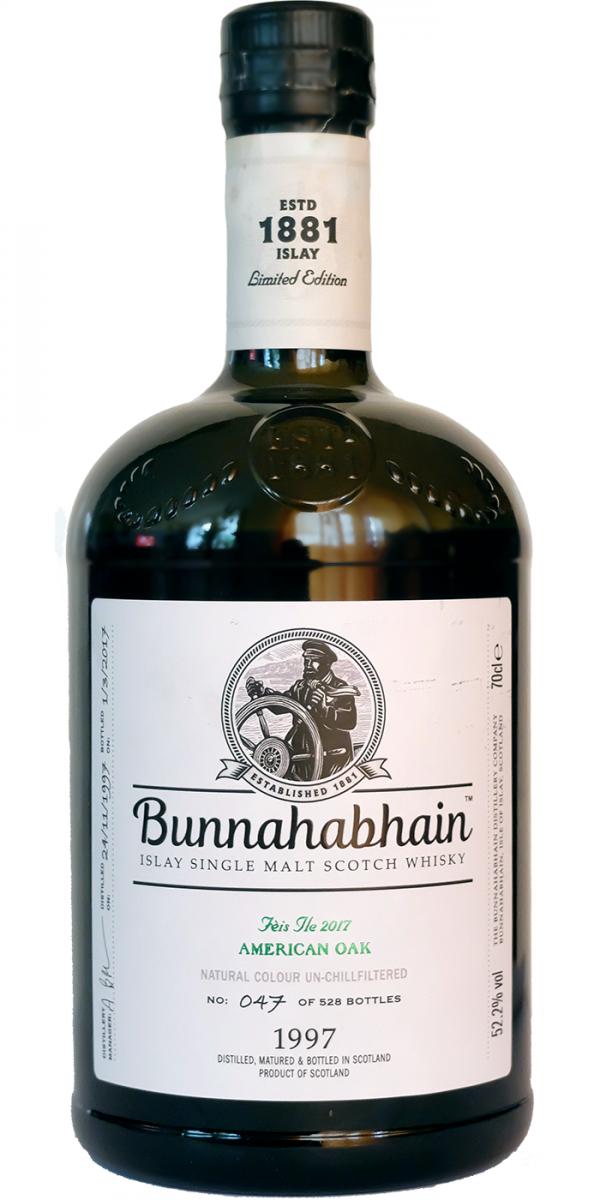 The American Oak bottle was the most expensive of the bottles on offer at the festival last year. It clocked in at £250 but it will cost you well over £300  now at auction or reseller websites. The whisky was distilled in 1997 and matured in refill sherry hogsheads for 20 years before a 3 month finish in virgin american oak barrels. The kind of thing that would be used to mature bourbon in. It is bottled at a cask strength of 52.2% ABV and is natural colour. There were only 528 bottles last year so there won’t be many around to find if you are interested now.

Nose – Bourbon, Bourbon and more Bourbon. There is flashes of some of the bourbons I have reviewed recently. Vanilla, oak, honey and ginger are all there.

Palate – More of the bourbon notes and a drying tree sap. The sherry cask is still pretty hidden but gives a little orange rind

Finish – A drying long finish which will be coming mostly from the original cask I suspect. The virgin oak is predominant though with ginger, pine cones and wood sap.

This is such a laugh this whisky. It tastes nothing like the distillery or even scotch whisky but its great fun. For that I love it and spent a long time with it going back to it and seeing what was changing. The finishing period in virgin oak was only around three months apparently but it has pretty extensively made its presence known. I am not sure what the logic behind this was but its been a laugh anyway.