Aberlour A’bunadh (pronounced a-boon-arh) is that one expression where everything thinks they know how to pronounce. To help you out I have embedded the review on YouTube from none other than Mr Ralfy Mitchell himself on a batch from a few years ago.

The Aberlour distillery is currently owned by Pernod Ricard along with other volume distilleries Strathisla and until very recently Glenallachie before the later was sold to Mr Billy Walker. Aberlour is situated in the town of Aberlour in Moray and has a very good visitor centre and most importantly a Bottle-Your-Own option as well. 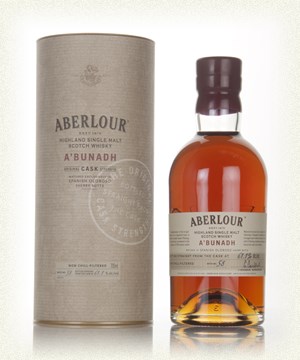 Aberlour A’Bunadh is a non age stated whisky which is closing in on its 60th batch. All batches are cask strength, natural colour and un chill-filtered. Each batch is a combination of first-fill Oloroso sherry casks from a range of ages.

The word “A’Bunadh” means “origin” in Gaelic. The marketing story is about releasing a whisky which harks back to the old days of whisky production. The idea is to release a bottle which might have been released decades ago when whisky was perhaps not so fashionable.

The prices of these bottles are generally very competitive on the retail market. If, however, a batch gains traction as a particularly good batch then secondary prices can get out of hand very quickly so best to get in their quick at your local shop.

Nose – slight saline, orange rind, toffee and bags of oak spices. Not spirity harsh on your nostrils even without water.

Finish – The finish adds a sweetness from a little honey and last a long time with orange chocolate.

This is a lovely whisky and a must buy for anyone who likes sherry matured whiskies. This is the kind of whisky which coined the term “sherry bomb” and at a very respectable price. I recently went to a whisky tasting in Glasgow and for the people at my table this was the standout dram. Even people you were apprehensive on trying it given the strength were surprising how palatable and well behaved this dram is. Recommended.