On Thursday 4th May the sixth YouTube community tasting took place and again I was lucky enough to buy a kit to take part. I am slightly later doing this article than I would like but at least it gave me the opportunity to re-watch the stream on YouTube all over again.

To watch the video yourself you can catch it below:

The theme of this sample kit was around the Octomore whisky brand from Bruichladdich. It is named Octomore after James Browns farm called Octomore. Some blog articles will tell you because that is the ppm of the peat level which isn’t true. In fact the first batch was 90PPM not 80 as some might tell you. Octomore was one of the first farms to exclusively grow barley for Bruichladdich but is also the source of all the water used in the bottling of Bruichladdich on site. Additionally, the x.3 Islay Barley releases of Octomore use barley only grown on Octomore farm. Octo cubed then really (water source, barley and name all Octomore)

Conducting the night is usually Head Distiller Adam Hannett but sadly he caught a nasty bug and couldn’t make it. Luckily Joanne Brown, Brand Ambassador and niece of James Brown no less, was at the distillery to take charge of proceedings. It was a nice touch to have the first part of the night with both Joanne and James.

James is quite a character and is good at captivating an audience. His stories included how the water gets from the farm to the distillery, how hard barley growing is on Islay as well as his experienced opinion of the Octomore whisky being tasted.

Joanne is an experienced ambassador and held her own in front of the camera. She gave us all an insight into how whisky is made at Bruichladdich especially for Octomore. What I love about these videos is all the geeky nuggets of information which can get distilled out over the course of a couple of hours. I particularly liked the discussion on the peat used for Octomore and how that gives the distinctive flavour of peated whiskies generally and Octomore specifically. The one thing I noticed about Port Charlotte especially is the way the peat smoke can hide itself inside the spirit before making itself known slowly in the glass. Bruichladdich peated malt is the shy Islay whisky if you like.

The second half of the night brought into play a Canadian shop owner called David. David has a strong collection of Bruichladdich for sale and has been involved and interested in the distillery since it was brought back to life in 2001. If you are from Canada his store is Willow Park wine and spirits in Alberta.

Below is my thoughts on the three casks which were tasted during the night. This is my last MP YouTube tasting I will be consecutively taking part in since the very beginning. The 7th tasting will be a Islay Barley exploration On September 21st and the kits were sold out in 2 hours. I was not lucky enough to get any but Bruichladdich is trying to do 3 of these interesting nights a year so I will be back soon!

Speaking of missing out Fies Ile 2017 is at the end of the month. For those who don’t know is a whisky festival on Islay which has been going on for a number of years now. Each distillery puts on special events during the week including bottling a special expression to buy on the day from the distillery. For Bruichladdich’s part they will be filming as much of the festivities as possible to share on YouTube with people like me who will be in work not over there to take part. 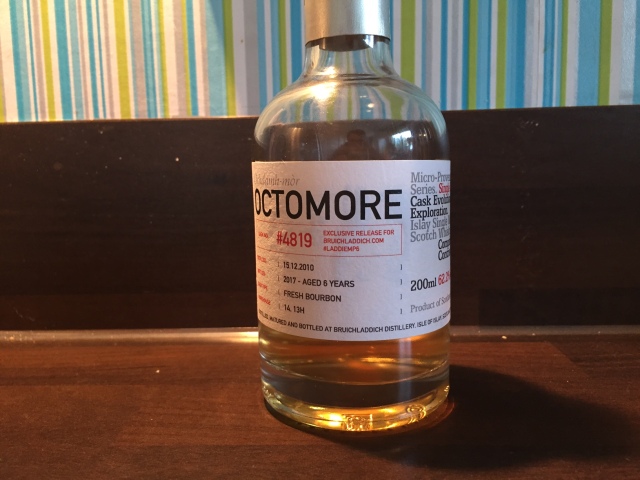 Finish – thick and sticky finish which goes on. The smoke is not an overcoat but the central strand of the flavour profile all the way through.

Palate – thick and chewy. The sherry type flavours develop into more red fruits like cherries and raspberries. Clean on the palate even with the strength. Dry herbaceous peat smoke again like the first one.

Finish – Another Octomore another long finish. There is so much cask influence you can really taste fortified wine long after the glass is empty.

Final Thoughts – Joanne mentioned Rivsaltes can be used to give a sherry style influence and it really is true. A solution to the supply and demand problem of quality sherry casks perhaps? 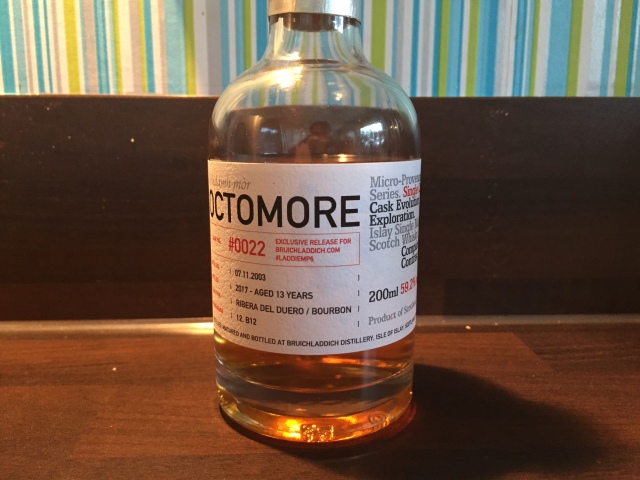 Final Thoughts – sweeter and softer after 13 years. This cask originally would have been in the Octomore 2.2 Orpheus but has been cask hopped after being left behind in the warehouse for 7 years. The extra cask influence has layers more flavours on more flavours. I would enjoy buying a bottle of this but this was a unique cask and now it is bottled it can never be totally completely recreated.