A recent impulse trip to the Good Spirits Company in Bath Street Glasgow lead to an impulse purchase of a special little miniature.

The Balblair distillery in its current location was built in 1895 because of the coming of the railways. It was mothballed in 1911 but it took until 1932 before all the barrels in the warehouses were emptied.

The site was used by the army during the war as stores which was very common during the period. The distillery was bought back into life in 1949 having been bought by the owner of the Old Pulteney distillery. It would be further developed and upgraded through the 1960’s and 1980’s.

The current owners of Balblair are Inver House which also own Old Pulteney, AncNoc, Speyburn and Balmenach. All distilleries which I rate highly for quality and consistency.

The current small range of official single malts came about in a rebranding in 2007 based around the concept of vintages rather than age statements. 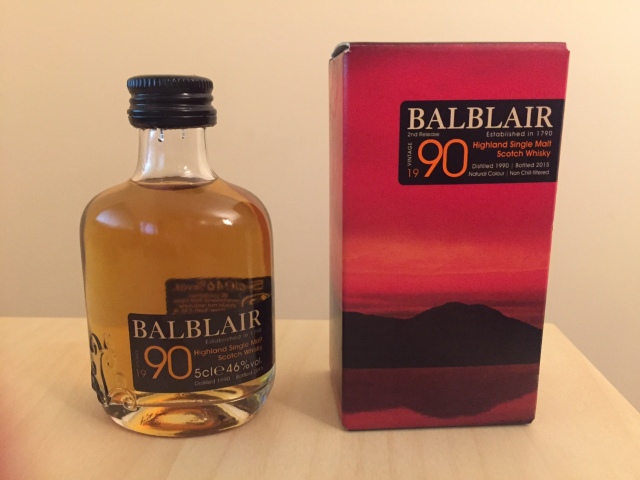 The 1990 vintage was bottled in 2015 making this a 25 year old whisky. Naturally presented at 46%ABV making it a high quality whisky. This expression is still for sale at £102.79 here.

In a departure from the first edition of this vintage this one was matured in an ex-bourbon barrel before a 2 year stint in Oloroso sherry.

Nose – grapefruit juices and runny honey give a bitter sweet nose. There is strong spiciness straight away. In the nose the bourbon barrel is obvious to me but a orange bitter note is there from the sherry finish.

Palate – thick and chewy texture. 46% is a nice strength for this bags of flavour but not over powering strength. wood spices and citrus zestiness open the palate before developing into milk chocolate and crystallised ginger.

Finish – bucket loads of woody earthern herbs and spices linger on and on in the finish. There has been lots of wood interaction over the decades with this one and a tiny sip goes a long way. The finish ends with a drying bitter edge. lovely.

This is an excellent single at an exceptional price in our current slightly insane market. This is a well aged whisky with bucket loads of well integrated flavours across a wide flavour profile. The bourbon barrel has brought sweetness and honey while the sherry cask has layered on preserved fruits and orange peel in a drying sour edginess to balance everything out. There is lots here to sit, ponder and enjoy. One to pick up while it is widely available I think.