So this might sound surprising but I have not tried many Springbank’s. In fact, I have only tried one and it is an unusual one. This limited run Springbank Green is my first toe in the water for the lightly peated Campbeltown single malt. If I was doing this properly I would have started with the house style standard 10 year old before moving on to special more limited releases like this. I did not intend to buy this one though. It came up at auction and I put in a cheeky bid not expecting to win it. This rarely happens to me so was a nice little surprise at the end of last year.

The Springbank distillery is owned by J&A Mitchell which has been owned by the same family since 1828.

The campbeltown region on the  Kintyre peninsula was historically a very popular area for whisky production. The location of the region close to Ireland and easily accessible to ships was key to the quantity of distilleries which sprang up the area. Additional benefits for production in the area include a local coal mine, local peat and local barley. At its peak over two centuries ago their were around thirty active distilleries supplying blenders in Scotland.

Today the region might only have three working distilleries in the form of Springbank, Glenglye and Glen Scotia but there is a renewed activity in the area. Springbank has been invested in heavily in the last seven years with a 50 strong workforce, renewed visitor experience and the independent bottle shop Cadenhead’s, which they own, has been moved to a more prominent place in the town. Glengyle has recently released its first core 12 year old bottle to critical acclaim and finally Glen Scotia has been bought over by an investment company and expanded with a new branding available globally.

Since 2014 Campbeltown has run its own whisky festival. All three distilleries get involved in special visitor events as well as other non whisky related local enterprises. The timing of the festival is always set to be the week before the Islay festival so whisky tourists from all over the world can be involved before catching the ferry to Islay. 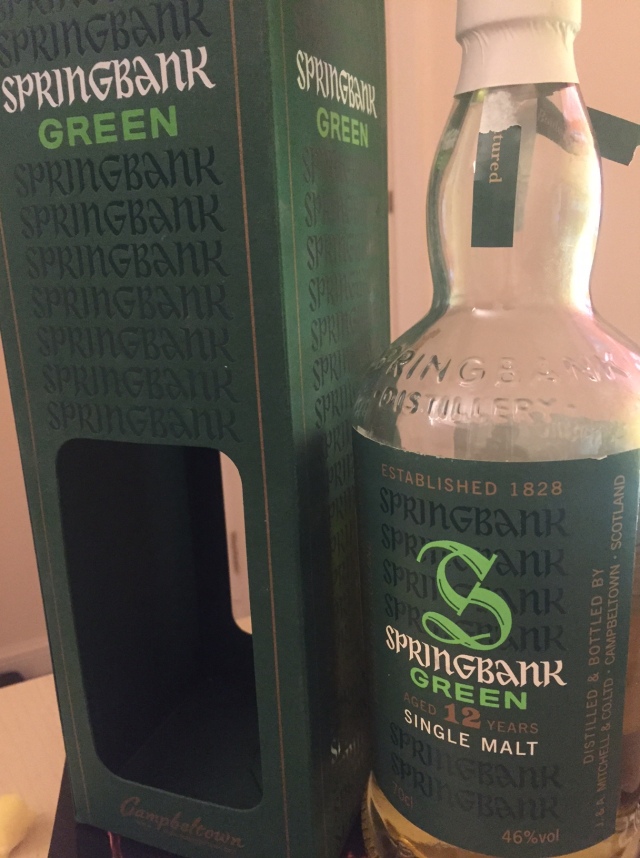 This green Springbank was released in December 2014 as a 12 year old. The name comes from the use of organic barley. There was only 9000 bottles released worldwide and was marketed at £60. The casks used were all ex-bourbon barrels and bottled at 46%. As with all official bottles from Springbank there is no colouring added and no chill-filtration. I managed to buy this at auction for £40 + fees which is a nice little saving. This particular bottle does not seem to have the same fan base as many other special released from the distillery so I think that is the reason I got a steal.

Finish – warehouse dampness and earth notes start the finish with more of the fruit notes interspersed around it. The whole experience finishes with some oak tannin’s

This Springbank like all the expressions from the distillery use peat in the traditional sense. As a fuel to dry barley rather than a flavour source like modern day Islay whiskies do. Another good example of this style is Benromach and it is a style I am coming to enjoy. There is something interesting and complex about the combination of fresh ripe fruit balanced off with a earthy damp note from light peating levels in the barley.

This particular bottle only uses ex-bourbon barrels which is quite a departure from most of the core bottles which have heavy sherry influences in their recipe. I think that is why a lot of core fans of the distillery did not rush out of the buy this one. Their loss, however, is my gain on this occasion.