Back to single malts today as we close in on Christmas. The well sherried Tamdhu 10 year old 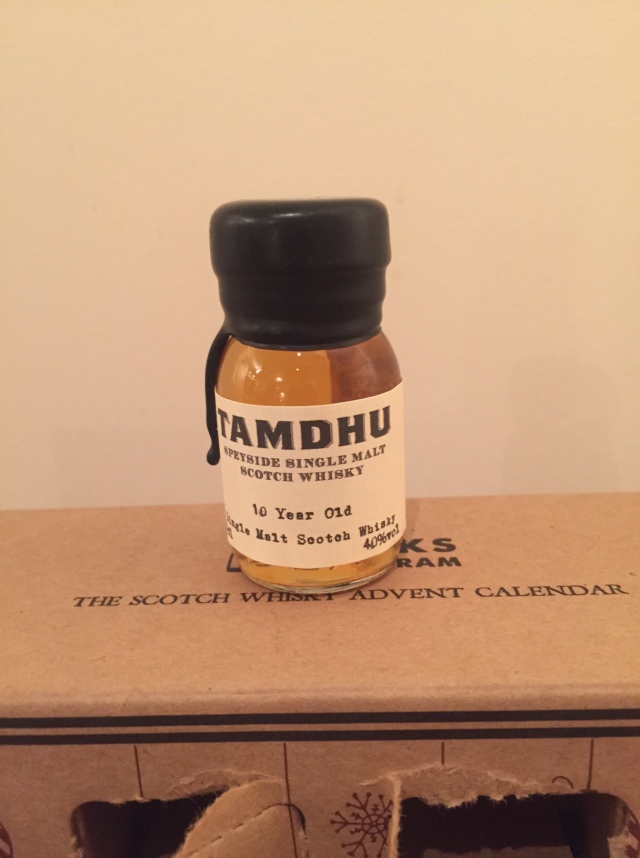 Tamdhu distillery is a classic Speyside distillery which in the last few years has been given a bit of a marketing makeover. It is now owned by Ian Macleod who also own Glengoyne who have released a range of single malts from the distillery. It is located in Knockando, Aberlour which is a locality rich with distilleries.

Tamdhu was founded in 1896 by a group of investors who wanted to start producing there own whisky. From the outset all this whisky was sold to the large blending houses. From then on Tamdhu had a very unremarkable history pumping out quantity for blending.

The 1970’s saw capacity increased to the three sets of stills currently in operation today. In 2010 Tamdhu was now owned by Edrington Group who decided to mothball the distillery as being surplus to requirements. In 2013 production was restarted by Ian MacLeod who had purchased the distillery in 2011.

Gordan & MacPhail bottles Tamdhu quite regularly and until 2013 independent bottlings were the only source of this distilleries produce. Today the official range consists of:

This dram is 40% ABV and is the entry level dram from Tamdhu’s core range. It is available for £34 here. All the casks used were ex-sherry spanish casks and no artificial colouring has been used. The No Age Statement release is not chill-filtered but there is no information available for this 10 year old so I assume it must have been filtered.

I really love this whisky. It is excellent quality, really interesting and strongly priced. The real making of this whisky is the finish. It almost takes you by surprise in the strong dry bitter complexity. I was expecting the sweeter finish in something like the Aberlour 12 but found something more akin to a Glengoyne. The key here I believe is the use of real sherry casks which have been transported in whole. Not sent flat pack and reassembled in Scotland.

One thought on “Tamdhu 10 Year Old”